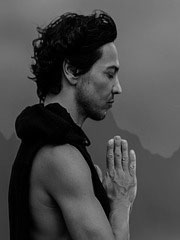 “With Clinging as condition, Becoming arises”.

“With Becoming as condition, Birth arises.”