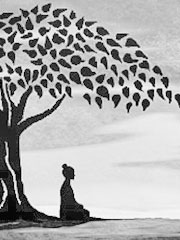 Atman is a Sanskrit word, normally translated as ‘soul’ or ‘self’ (also ego). In Buddhism, the concept of Atman is the prime consequence of ignorance, – itself the cause of all misery – the foundation of Samsara itself.

In a number of sutras of Mahayana Buddhism, as well as in certain Buddhist Tantras, however, the term “Atman” is used in a dual sense, in some instances denoting the impermanent, mundane ego (attachment to which needs to be overcome), and on other occasions explicitly referring to the ultimately real, pure, blissful Self of the Buddha in the state of Nirvana, a Selfhood stated to be unchanging, unshakeably firm, and eternal within all beings (see Mahayana Mahaparinirvana Sutra). This latter doctrine, however, is vigorously and fully rejected by Theravada Buddhism.

So, when Buddhists claim that there is no Atman, they are not really saying that it does not exist, but that it exists solely as a cognitive obscuration – as an innate response to the world around us; and this deeply enmeshed obscuration lies at the root of all misery.

At no time or location in the Nikayas is the Atman rejected. What has Buddhism to say of the Self? “That’s not my Self” (na me so atta); this, and the term “non Self-ishness” (anatta) predicated of the world and all “things” (sabbe dhamma anatta; Identical with the Brahmanical “of those who are mortal, there is no Self/Soul”, (anatma hi martyah, ). “The Soul is the refuge that I have gone unto”. For anatta is not said of the Self/Soul but what it is not. There is never a ‘doctrine of no-Soul’, but a doctrine of what the Soul is not (form is anatta, feelings are anatta, etc.).

What do the Nikayas have to say of the Self? “That’s not my Self” (na me so atta); this, and the term “non Self-ishness” (anatta) predicated of the world and all “things” (sabbe dhamma anatta; Identical with the Brahmanical “of those who are mortal, there is no Self/Soul”, (anatma hi martyah, ). “The Soul is the refuge that I have gone unto”. For anatta is not said of the Self/Soul but what it is not. There is never a ‘doctrine of no-Soul’, but a doctrine of what the Soul is not (form is anatta, feelings are anatta, etc.).

Contextual doctrinal examples being: “The Soul (Attan) is Charioteer”. ”Ananda, dwell with the Soul (attan) as your Light, with the Soul as your refuge, with none other as refuge.” . “The Soul (Attan) is ones True-Nature (Svabhava)” “The Soul is the refuge that I have gone unto; it is the Light, that very same sanctuary, that final end goal and destiny. It is immeasurable, matchless, that which I really am, that very treasure; it is like unto the breath-of-life, this Animator.”

With the doctrine of anatta (Pāli; Sanskrit: anātman) Buddhism maintains that the concept of ātman is unnecessary and counterproductive as an explanatory device for analyzing action, causality, karma, and reincarnation in a Buddhist context. Buddhists account for these and other “self”-related phenomena by other means, such as pratātya-samutpāda, the skandhas, and, for some schools, a pudgala. Thus it is not necessary for Buddhists to posit an ātman, and they further regard it as undesirable to do so, as they believe it provides the psychological basis for attachment and aversion. Buddhism sees the apparent self (our identification as souls) as a grasping after a self–i.e., inasmuch as we have a self, we have it only through a deluded attempt to shore it up.

Not all Buddhist scriptures, however, deny the reality of atman. Within the Mahayana branch of Buddhism, there exists an important class of sutras (influential upon Ch’an and Zen Buddhism), generally known as Tathagatagarbha sutras (“Buddha-Matrix” or “Buddha-Embryo” sutras), a number of which affirm that, in contradistinction to the impermanent “mundane self” of the five “skandhas”(the physical and mental components of the mutable ego), there does exist an eternal True Self, which is in fact none other than the Buddha himself in his ultimate “Nirvanic” nature. This True Self of the Buddha is indeed said to be attained in the state of Mahaparinirvana. Furthermore, the essence of that Buddha — the Buddha-dhatu (“Buddha-nature”, “Buddha principle”), or Dharmakaya, as it is termed — is present in all sentient beings and is described as “radiantly luminous”. This Buddha-dhatu is said in the Nirvana Sutra to be the uncreated, immutable and immortal essence (“svabhava”) of all beings, which can never be harmed or destroyed. The most extensive sutra promulgating this as an “ultimate teaching” (uttara-tantra) on the Buddhic essence of all creatures (animals included) is the Mahayana Mahaparinirvana Sutra. There we read in words attributed to the Buddha: “.. it is not the case that they are devoid of the Self. What is this Self? Any phenomenon that is true , real , eternal , sovereign/autonomous and whose foundation is unchanging is termed ‘the Self’ .” (translated from Dharmakshema’s version of the Mahayana Mahaparinirvana Sutra). This True Self — so the Buddha of such scriptures indicates — must never be confused with the ordinary, ever-changing, worldly ego, which, with all its emotional and moral taints and turmoil, conceals the True Self from view. Far from being possessed of the negative attributes of the mundane ego, the Buddhic or Nirvanic Self is proclaimed by the Buddha of the Nirvana Sutra to be characterised by “Great Loving-Kindness, Great Compassion, Great Sympathetic Joy, and Great Equanimity”. There are numerous references to the reality of this transcendental yet immanent Self in the Mahayana Mahaparinirvana Sutra, which scripture the Buddha declares to embody the “uttarottara” (absolutely supreme) meaning of all Mahayana Buddhism.

Other Buddhist sutras and Tantras also speak affirmatively of the Self. For instance, the Srimala Sutra insists: “When sentient beings have faith in the Tathagata and those sentient beings conceive with permanence, pleasure, self, and purity, they do not go astray. Those sentient beings have the right view. Why so? Because the Dharmakaya of the Tathagata has the perfection of permanence, the perfection of pleasure, the perfection of self, the perfection of purity. Whatever sentient beings see the Dharmakaya of the Tathagata that way, see correctly.” (The Lion’s Roar of Queen Srimala , Motilal, Delhi 1974, tr. by A. and H. Wayman, p. 102). The early Buddhist Tantra, the Guhyasamaja Tantra, declares: “The universal Self of entities sports by means of the illusory samadhi. It performs the deeds of a Buddha while stationed at the traditional post” (i.e. while never moving). The same Tantra also links the Self with radiant light (a common image): “The pure Self, adorned with all adornments, shines with a light of blazing diamond ..” (Yoga of the Guhyasamajatantra by Alex Wayman, Motilal Delhi, 1977, pp. 18 and 28). And the All-Creating King Tantra (also designated a sutra) has the primordial Buddha, Samantabhadra, state, “.. the root of all things is nothing else but one Self … I am the place in which all existing things abide.” (The Sovereign All-Creating Mind, tr. by E.K. Neumaier-Dargyay, pp. 158-159).