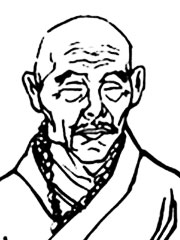 An Shih-kao (?-~170) (安世高; pinyin Ān Shígāo) was a prince of Parthia, nicknamed the “Parthian Marquis”, who renounced his throne in order to serve as a Buddhist missionary monk.

The prefix An in An Shih Kao’s name is an abbreviation of Anxi (Ch:安息), meaning Parthia in ancient Chinese: Anxi is a transcription of “Arsaces”, the founder of the Arsacid Dynasty of Parthia. Most Parthian visitors who took a Chinese name received the An prefix to indicate their origin.