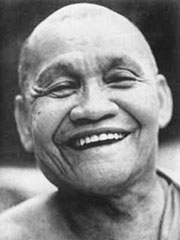 Venerable Ajahn Chah Subhatto (Chao Khun Bodhinyanathera) (alternatively Achaan Chah, occasionally with honorific titles Luang Por and Phra) (18 June 1918, Thailand – 1992), was one of the greatest meditation masters of the twentieth century. Known for his informal and direct style, he was a major influence on Theravada Buddhism around the world.

Venerable Ajahn Chah was an influential and perhaps the most famous monk of the Thai Forest tradition of Theravada. The monks of this tradition use various ascetic practices, known as dhutanga, on an occasional or regular basis to deepen their devotional practice. They might, for example, eat only one meal a day, sleep outside under a tree, or visit fearsome forests or graveyards. They also use meditation, for calming (samatha) and for insight (vipassana).

Ajahn Chah established the monasteries of Wat Nong Pah Pong and Wat Pah Nanachat in Northeast Thailand, the grounds of which contain some of the last remaining forest land in Thailand. Wat Pah Pong now includes over 250 branches in Thailand, as well as over 15 associated monasteries and ten lay practice centers around the world.

Ajahn Chah himself did not write much if anything for publication, but his talks were recorded, transcribed, translated and published as books and as free materials available on the Internet.

Over a million people attended Ajahn Chah’s funeral in 1992, including the Thai royal family. He left behind a legacy of Dhamma talks, students, and monasteries.

“When one does not understand death, life can be very confusing.”

“Only one book is worth reading: the heart.”

“Don’t think that only sitting with the eyes closed is practice. If you do think this way, then quickly change your thinking. Steady practice is keeping mindful in every posture, whether sitting, walking, standing or lying down. When coming out of sitting, don’t think that you’re coming out of meditation, but that you are only changing postures. If you reflect in this way, you will have peace. Wherever you are, you will have this attitude of practice with you constantly. You will have a steady awareness within yourself.”

“When sitting in meditation, say, “That’s not my business!” with every thought that comes by.”

“The heart of the path is quite easy. There’s no need to explain anything at length. Let go of love and hate and let things be. That’s all that I do in my own practice.”

“We practice to learn how to let go, not how to increase our holding on to things. Enlightenment appears when you stop wanting anything.”

“You are your own teacher. Looking for teachers can’t solve your own doubts. Investigate yourself to find the truth – inside, not outside. Knowing yourself is most important.”

“Try to be mindful and let things take their natural course. Then your mind will become still in any surroundings, like a clear forest pool. All kinds of wonderful, rare animals will come to drink at the pool, and you will clearly see the nature of all things. You will see many strange and wonderful things come and go, but you will be still. This is the happiness of the Buddha.”