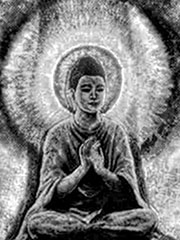 The literal translation of the term Abhidharma is unclear. Two possibilities are most commonly given:

1) abhi– higher or special + dharma– teaching, philosophy, thus making Abhidharma the ‘higher teachings’, or 2) abhi – about + dharma of the teaching, translating it instead as ‘about the teaching’ or even ‘meta-teaching’.

Numerous apparently independent Abhidharma traditions arose in India, roughly during the period from the 2nd or 3rd Century BCE to the 5th Century CE. The 7th Century Chinese pilgrim Xuanzang reportedly collected Abhidharma texts from seven different traditions. In the modern era, only the Abhidharmas of the Sarvastivadins and the Theravadins has survived intact, each consisting
of seven books. The Theravada Abhidharma, the Abhidhamma Pitaka (discussed below), is preserved in Pāli, while the Sarvastivadin Abhidharma is preserved only in Chinese- the (likely Sanskrit) original texts having been lost. A small number of other Abhidharma texts of unknown origin are preserved in translation in the Chinese canon.

Early Western translators of the Pāli canon found the Abhidhamma Pitaka to be the least interesting of the three sections of the Tipitaka, and as a result this important aspect of Buddhist philosophy was little studied in the West until the later half of the 20th Century. Caroline Rhys Davids, a Pāli scholar and the wife of Pali Text Society founder T.W. Rhys Davids, famously described the ten chapters of the Yamaka as “ten valleys of dry bones”. Interest in the Abhidhamma has grown in the West as better scholarship on Buddhist philosophy has gradually revealed more information about its origins and significance.