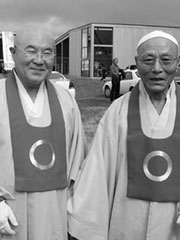 Won Buddhism, often written Wonbuddhism, is a modern religious movement based in South Korea. The Korean word, based on a Chinese character, Won means circular.

Founded in 1924 by the venerable So Tae San, Won Buddhism combines aspects of Chinese Mahayana Buddhism, Zen Buddhism and Christianity.

Combining Zen, Seon, Chan Buddhist teachings with some Christian influence, Won Buddhists believe in the Irwonsang, symbolized by a black circle, which represents the ultimate truth.

Sotaesan is unique among founders of Buddhist sects in that he found enlightenment through Korean folk religious practices, and when seeking to explain his experience, discovered that the Buddhist perfection of wisdom teachings (prajnaparamita) were most appropriate. Sotaesan summarized his doctrine in the “Verse of Truth,” which contains echoes of the Heart Sutra’s paradox, “form is emptiness, and emptiness is form”:

Being changes into Non-beingAnd Non-being into Being,Turning and turning again;But in the ultimate RealityBeing and Non-being are both Void,And the Void contains everything and is perfect.

Won Buddhist practice shares much in common with traditional Zen practice, emphasizing sitting meditation and seeking enlightenment but eschewing the monastic isolation of Buddhist devotionalism. Sotaesan broke new ground in his insistence on the equality of men and women in Buddhist practice, and the need for properly organizing spiritual life in the context of science and technological development.