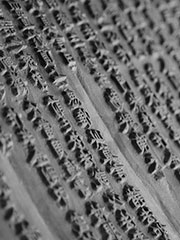 The Tripitaka Koreana (lit. Goryeo Tripitaka) or Palman Daejanggyeong («Eighty-Thousand Tripitaka«) is a Korean collection of the Tripitaka (Buddhist scriptures), carved onto 81,340 wooden printing blocks in the 13th century. It is the world’s most comprehensive and oldest intact version of Buddhist canon in Chinese script, with no known errors in the 52,382,960 characters.

The work is stored in Haeinsa, a Buddhist temple in South Gyeongsang province, in South Korea.

The name «Goryeo Tripitaka» comes from «Goryeo», the name of Korea from the 10th to the 14th centuries. It served as reference for the edition of the Taisho Shinshu Daizokyo.

The Tripitaka Koreana was first carved in 1087 when Goryeo was invaded by the Khitan in the Third Goryeo-Khitan War. The act of carving the woodblocks was considered to be a way of bringing about a change in fortune.

The original was destroyed during the Mongol invasions of Korea in 1232, when Goryeo’s capital was moved to Ganghwa Island during nearly three decades of Mongol attacks. King Gojong ordered the re-creation of the Tripitaka; the carving took 16 years, from 1236 to 1251. In 1398, it was moved to Haeinsa, where they have remained housed in four buildings.

The Tripitaka Koreana is the 32nd national treasure of Korea, and Haeinsa Temple Janggyeong Panjeon, the depository for Tripitaka Koreana, has been designated a UNESCO World Heritage Site .