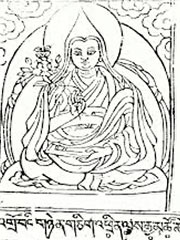 He was recognised as a reincarnation of the Dalai Lama in 1860 and enthroned on 14 August that year. During his period of training as a child, Tibet banned Europeans from entering the country because of wars Britain was fighting against Sikkim and Bhutan, both of whom were controlled to a considerable degree by the lamas in Lhasa. These wars were seen as efforts to colonise Tibet — something seen as unacceptable by the lamas. Also, with missionaries threatening to enter Tibet via the Mekong and Salween Rivers, Tibet ceased recognising the authority of the Manchu government for the same reason.