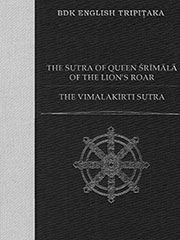 The sutra teaches the reality of an ultimate, immaculate Consciousness within each living being, which is the Buddhic «Dharmakaya» (essence of Truth), which is yet temporarily sheathed in obscuring defilement. This Dharmakaya, when viewed as intrinsically free from spiritual ignorance, is said to constitute Eternity, Bliss, the Self and Purity in their perfect state. The great Queen Srimala, empowered by the Buddha to teach the Dharma, affirms:

The sutra has significantly contributed to the Mahayana notion of the permanent, steadfast and eternal «Tathagatagarbha» (Buddha-Matrix), which is nothing less than the perfect Dharmakaya temporarily concealed by (ultimately unreal) mental contaminants.