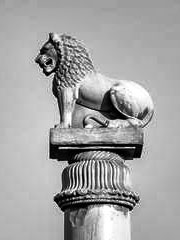 The pillars of Ashoka are a series of columns dispersed throughout the northern Indian subcontinent, and erected by the Mauryan king Ashoka during his reign in the 3rd century BCE.

Many of the pillars are carved with proclamations reflecting Buddhist teachings: the Edicts of Ashoka. The most famous of the columns is the one that was erected at Sarnath, and is now exposed in the Sarnarth museum. It has been used as one of the central symbols of India, in particular on Indian banknotes.

The Sarnath pillar marks the site of the first sermon of the Buddha, where he taught the Dharma to five monks. The pillar bears one of the Edicts of Ashoka, an inscription against schism within the Buddhist community, which reads «No one shall cause division in the order of monks».

The pillar is a column surmounted by a capital, which consists of a canopy representing an inverted bell-shaped lotus flower, a short cylindrical abacus where alternate four 24-spoked Dharma wheels with four animals (an elephant, a bull, a horse, a lion in this order), a four lions facing the four cardinal directions. The four animals are believed to symbolize different steps of the Gautama Buddha’s life:

The four lions surmounting the capital symbolize the kingship of the Buddha and his roar over the four directions.

There are also non-religious interpretations to the symbolism of the pillars, describing the four lions as the symbol of Ashoka’s rule over the four directions, the wheels as symbols of enlightened rule (Chakravartin), and the four animals as symbols of four surrounding territories of India:

This secular interpretation is rather contradicted by the presence of the Edicts, which tend to make Ashoka’s pillars a vehicle of religious proselytism rather that just a symbol of royal power.