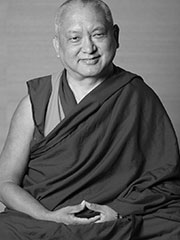 Thubten Zopa Rinpoche (born 1946) is a lama from Thami, a village in the Solo Khumbu region of Nepal. Early in life he was recognized as the reincarnation of the Lawudo Lama, from the same region (hence the title «Rinpoche«). He acquired further religious education at Dung-kar Monastery in Sikkim and would have studied in Tibet had it not been for the 1959 Chinese invasion. Instead his spiritual teacher, Geshe Rabten, entrusted him to the care of Lama Thubten Yeshe.

«Lama Zopa» is most noteworthy as the co-founder, with Lama Yeshe, of Kopan Monastery and the Foundation for the Preservation of the Mahayana Tradition, of which he remains spiritual director.

Rinpoche has established a number of free schools in India, and Mongolia, as well as a school offering western education (up to year 9) for the monks and nuns at Kopan Monastery and Nunnery. In 1999, Lama Zopa Rinpoche sponsored the building of Idgaa Choizinling Monastery in Ulaanbaatar Mongolia.