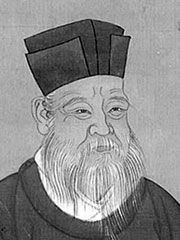 Zhu Xi or Chu Hsi (1130–1200) was a Song Dynasty (960-1279) Confucian scholar who became one of the most significant Neo-Confucians in China. He taught at the famous White Deer Grotto Academy for some time. Zhu Xi was also influential in Japan, where his followers were called the Shushigaku (朱子学) school.

During the Song Dynasty, Zhu Xi’s teachings were considered to be unorthodox. Zhu Xi and his fellow scholars codified what is now considered the Confucian canon of classics: the Four Books, consisting of the Analects of Confucius, the Mencius, the Great Learning, and the Doctrine of the Mean; and the Five Classics: the Classic of Poetry, the Classic of History, the Book of Changes (I Ching), the Classic of Rites and the Spring and Autumn Annals. Zhu Xi also wrote extensive commentaries for all of these classics. The writings were not widely recognised in Zhu Xi’s time; however, they later became accepted as standard commentaries on the Confucian classics.

Zhu Xi considered the earlier philosopher Xun Zi to be a heretic for departing from Confucius’s beliefs about innate human goodness. Zhu Xi contributed to Confucian philosophy by articulating what was to become the orthodox Confucian interpretation of a number of beliefs in Daoism and Buddhism. He adapted some ideas from these competing religions into his form of Confucianism.

He argued that all things are brought into being by two universal elements: vital (or physical) force (qi), and law or rational principle (li). The source and sum of li is the Tai Ji (Wade-Giles: Tai Chi), which means Great Ultimate. According to Zhu Xi, the Tai Ji causes qi to move and change in the physical world, resulting in the division of the world into the two energy modes (yin and yang) and the five elements (fire, water, wood, metal, and earth).

In terms of li and qi, Zhu Xi’s system strongly resembles Buddhist ideas of li (again, principle) and shi (affairs, matters), though Zhu Xi and his followers strongly argued that they were not copying Buddhist ideas. Instead, they held, they were using concepts present in the Book of Changes.

According to Zhu Xi’s theory, every physical object and every person contains li and therefore has contact with the Tai Ji. What is referred to as the human soul, mind, or spirit is defined as the Great Ultimate (Tai Ji), or the supreme regulative principle at work in a person.

Zhu Xi argued that the fundamental nature of humans was morally good; even if people displayed immoral behaviour, the supreme regulative principle was good. It is unclear whence exactly immorality arises; Zhu Xi argued that it comes about through the muddying effect of li being shrouded in qi, but this does not fully answer the question, as qi itself shares part of the Tai Ji.

According to Zhu Xi, vital force (qi) and rational principle (li) operate together in mutual dependence. These are not entirely non-physical forces: one result of their interaction is the creation of matter. When their activity is rapid the yang energy mode is generated, and when their activity is slow, the yin energy mode is generated. The yang and yin constantly interact, gaining and losing dominance over the other. This results in the structures of nature known as the five elements.

Zhu Xi discussed how he saw the Great Ultimate concept to be compatible with principle of Daoism, but his concept of Tai Ji was different from the understanding of Dao in Daoism. Where Tai Ji is a differentiating principle that results in the emergence of something new, Dao was something that was still and silent, operating to reduce all things to equality and indistinquishability. He argued that there is a central harmony that is not static, empty but dynamic, and that the Great Ultimate is in constant movement.

He did not hold to traditional ideas of God or Heaven (Tian), though he discussed how his own ideas mirrored the traditional concepts. He encouraged an agnostic tendency within Confucianism, because he believed that the Great Ultimate was a rational principle, and he discussed it as an intelligent and ordering will behind the universe. He did not promote the worship of spirits and offerings to images. Although he practiced some forms of ancestor worship, he disagreed that the souls of ancestors existed, believing instead that ancestor worship is a form of remembrance and gratitude.

Zhu Xi practiced a form of daily meditation similar to, but not the same as, Buddhist dhyana or chan ding (wg ch’an-ting). His meditation did not require the cessation of all thinking as in Buddhism, but was characterised by quiet introspection that helped to balance various aspects of one’s personality and allowed for focused thought and concentration. His form of meditation was by nature Confucian in the sense that it was concerned with morality. His meditation attempted to reason and feel in harmony with the universe. He believed that this type of meditation brought humanity closer together and more into harmony.

1241 his tablet was placed in the Confucian Temple.

The teachings of Zhu Xi were to dominate Confucianism, though dissenters would later emerge, such as Wang Yangming two and a half centuries later.

Life magazine ranked Zhu Xi as the forty-fifth most important person in the last millennium.