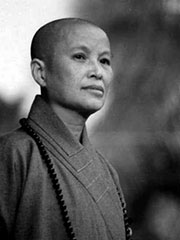 Venerable Master Cheng Yen (證嚴上人) is a Chinese Buddhist teacher and philanthropist. She was born in 1937 in Chingshui Village in Taichung County in Taiwan. Her uncle was childless, so she was given to be raised by her aunt and uncle. At the age of twelve, her father died suddenly from a stroke; it was searching for a burial place for him that Cheng Yen first came into contact with the Buddhist Dharma.

In 1963, she became the disciple of her mentor, the late Venerable Master Yin Shun, who gave her the dharma name of Cheng Yen and the courtesy name of Huichang. Yinshun also gave her the great expectation of «doing all for the Buddhist religion and for all beings», which is written with six characters in Chinese. From then on, these six characters became the highest ideals for Cheng Yen in belief, teaching, and practice.

Among other recognitions, Cheng Yen was nominated for the Nobel Peace Prize in 1993.

In order to address the nurse shortage on Taiwan’s east coast, the entire nurse-supply of the Tzu-Chi Technical College was offered. Tzu-Chi’s goal in this activity is to provide fine nurses with compassionate hearts. Cheng Yen resolved to organize and build the Tzu-Chi Nursing College, and with the assistance of many people, it was founded in 1989 in Hualien.