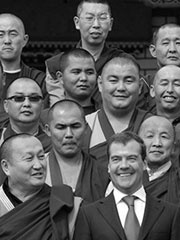 The Russian Federation, and perhaps strangely, Austria are the only two European states today that recognize Buddhism as an «official», though not necessarily «state religion» in their respective countries. On top of that, Russia also recognizes it, along with Islam, Judaism, and of course Orthodox Christianity, as native to Russian soil in the 1993 Constitution of the Russian Federation. All other religious groups are unrecognized, and must officially register and be subject to rejection by the state.