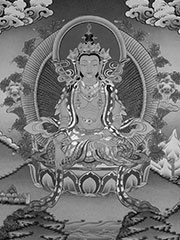 The founder of the Bon religion, the Lord Shenrab Miwo, was one of three brothers, Dagpa, Salba and Shepa. In past ages they studied the Bon doctrines in the heaven named Sridpa Yesang. When their studies were completed, they visited Shenla Odkar, the Deity of Compassion, to seek advice on how to help all the sentient beings submerged in suffering. They were told to act as guides for mankind in three successive ages of the world. Dagpa completed his work in the past world age. Shepa will come to teach in the next world age. And Salba, taking the name Shenrab, became the teacher and guide of this present world age.

Tonpa Shenrab was born a prince, married while young, and had children. At the age of thirty-one, he renounced the world and lived in austerity, teaching the doctrine.

During his whole life, his efforts to propagate the Bon religion were obstructed by the demon Khyabha Lagring. This demon fought to destroy or impede the work of Tonpa Shenrab, until the Lord eventually subdued him so that he became a disciple.

Once, while pursuing the demon to regain his stolen horses, Tonpa Shenrab arrived in Tibet. There he imparted instructions concerning the performance of rituals, but on the whole, he found the land unprepared to receive fuller teachings. Before leaving Tibet, Tonpa Shenrab prophesied that all his teachings would flourish in Tibet when the time was ripe. He departed this world at the age of eighty two Shen years (approximately 8,200 human years).

During his life, Tonpa Shenrab accomplished many great deeds, but the most famous are “12 great deeds” (Zedpa Chunyi). In more detail his great deeds are described in three descriptions of his biography: short (Dho Dhe or Short collection of aphorisms), discovered in the tenth century in one volume; medium (Dho Zermig or Penetrating Eye) two-volume, discovered in the 11th century; and the long (Zi Jid or the Brilliant) in 12 volumes, transmitted by means of oral transmission of Tulku Loden Nyingpo in the 14th century.