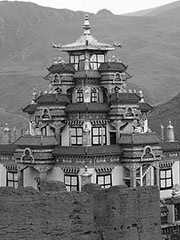 Surmang Monastery consists of a complex of nine monasteries founded about 600 years ago in Kham, eastern Tibet. It is the home of the Trungpa tulkus, the line of incarnate lamas that heads Surmang. The present head of the Surmang monasteries is Choseng Trungpa Rinpoche, the XII Trungpa Tulku.

Surmang is closely connected with the teachings of such remarkable Kagyu teachers such as Naropa, Marpa, Milarepa, Gampopa, and the Karmapas. Many of the Trungpas carried forth this tradition by themselves becoming renowned teachers. For example, Kunga Namgyal, Trungpa IV, was considered the most important Kagyu teacher of his time and wrote extensive commentaries on mahamudra.