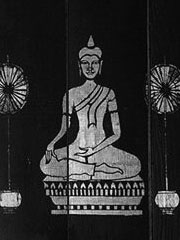 Satipatthana refers to the broad conception of Buddhist meditation in the Theravada Buddhist tradition. It is often called the Four Foundations of Mindfulness, namely, mindfulness of the body, of thoughts or the mind, of feelings and of mental objects or qualities. These are also known as the “four frames of reference” or Satipatthana-samyutta. Satipatthana can also be thought of as “establishing mindfulness” or sati-upatthana.