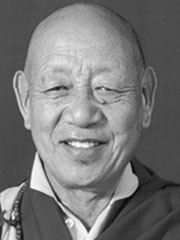 Rinpoche or Rimpoche (pronounced: rin-PO-shay) is a Tibetan Buddhist religious/theological honorific title. “Rinpoche” literally means “the precious one in human kind”. Presently the title is used to describe any esteemed lama or tulku who head a Buddhist temple. In Tibet and Bhutan, when used alone it refers to Padmasambhava, also called Guru Rinpoche, who first brought Tibetan Buddhism to the Himalayas.

A sampling of web definitions may render help in understanding the more specific usage and religious implications of the title:

By historic measures the title “Rinpoche” may be considered over-used and indicates little other than a title of respect, especially in cases where the title is self-applied.