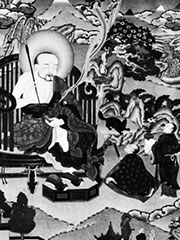 The Milinda Pañha (Pali. Literal translation: Questions of Milinda) is a Buddhist text which dates from approximately 100 BC. It records a dialogue in which the Indo-Greek king Menander (Milinda in Pali) of Euthydemia poses questions on Buddhism to the sage Nāgasena, who may or may not have been the same person as Nāgārjuna. The text may have initially been written in Sanskrit, however apart from the Sri Lankan Pali edition and its derivatives, no other copies are known.

The work has been translated in to English twice, once in 1890 by Thomas William Rhys Davids (reprinted by Dover Publications in 1963) and once in 1969 by Isaline Blew Horner (reprinted in 1990 by the Pali Text Society). A new abridged edition of Rhys Davids’ translation was first published by Bhikku Pesala in 1990. Both Rhys Davids’ original work and the abridged edition are now available electronically.