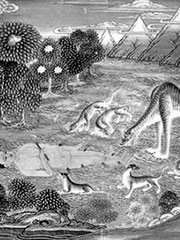 The Jataka is a voluminous body of folklore and mythic literature, primarily associated with the Theravada Buddhist tradition, as written in the Pali language (from about the 3rd century, A.D.); however, the stories found in the Jataka have been found in numerous other languages and media — many of them being translations from the Pali versions, but others are instead derived from vernacular traditions prior to the Pali compositions. Sanskrit and Tibetan Jataka stories tend to maintain the Buddhist morality of their Pali equivalents, but re-tellings of the stories in Persian and other languages sometimes contain significant amendments to suit their respective cultures.

In the 6th century, some of the stories were translated to Persian at the command of the Zoroastrian king Khosrau I. This translation was later retranslated to Greek, Latin and Hebrew. Some people believe that they formed the basis for Aesop’s Fables, Sindbad the Sailor and The Arabian Nights. Generally, the Jataka stories have disseminated from India to become part of the world’s folk-literature, in numerous variations, with the Pali recensions representing one cultural (and religious) notion of what the stories “ought” to be. The term “Jataka” refers to the Buddhist trope of treating each story as an incarnation of the Buddha-to-be prior to his enlightenment — although this is sometimes clearly a super-imposition over an earlier (i.e., pre-Buddhist) fable.

Within the Pali tradition, there are also many apocryphal Jatakas of later composition (some dated even to the 19th century) but these are treated as a separate category of literature from the “Official” Jataka stories that have been more-or-less formally canonized from at least the 5th century — as attested to in ample epigraphic and archaeological evidence, such as extant illustrations in bas relief from ancient temple walls. Some of the apocryphal Jatakas (in Pali) show direct appropriations from Hindu sources, with amendments to the plots to better reflect Buddhist morals. A comprehensive review of the Pali tales and their relation to monastic Buddhism can be found in Tales and Teachings of the Buddha by Garrett Jones, London, 1979 ISBN 0042941040, revised electronic version, Cybereditions, 2001 ISBN 1877275212

Jataka tales are not considered Buddha-vacana, i.e., generally, Theravada Buddhists do not accord them the authority of being the actual word of the Buddha, and Sri Lanka orthodoxy maintains that they are not canonical writings. However, in Burma and elsewhere they are included as part of the Pali canon, and these tales have been among the more popular and influential segments of Buddhist literature, irrespective of their heterodoxy.

In Theravada countries, several of the longer Jataka tales are still performed in dance, theatre, and formal (quasi-ritual) recitation to this day, and several are associated with particular holidays on the Lunar Calendar used by Cambodia, Thailand and Lao.