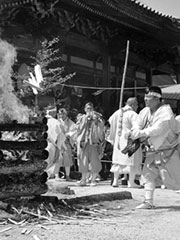 Gyeyul is the Korean name applied to a branch of Buddhism that specializes in the study of monastic discipline, or Vinaya. The Gyeyul school derives from the Chinese Lü or Vinaya school.

When Buddhism first came to Baekje in 384, it was introduced by a Serindian monk named Marananta, Buddhism was quickly embraced but largely unknown. So, a Korean monk named Gyeomik (, ) was sent to India to bring back more information. He is said to have traveled to India via the southern seas, studied Sanskrit and then came back to Baekje accompanied by another Indian monk, Paedalta (Vedatta?) and with many texts on the Vinaya and Abhidharma. Gyeomik translated these texts into Korean along with help from his disciples Tamuk and Hyerin and thus founded the Vinaya School in Korea.