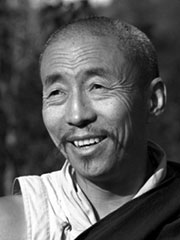 During the 1950s and 1960s Dhardo Rimpoche was friend and teacher to Sangharakshita, an English Buddhist who spent 14 years based in Kalimpong before returning to England to found the the Western Buddhist Order”. Friends of the Western Buddhist Order (FWBO). Sangharakshita considered Dhardo Rimpoche to be a living bodhisattva, and he is still revered in the FWBO. In the 1980s the FWBO’s charity Aid For India (now known as the Karuna Trust) undertook to provide funding for the ITBCI.

Dhardo Rimpoche’s motto was: “Cherish the doctrine; live united; radiate love”. He was concerned especially to teach the children at his school that “actions have consequences”.