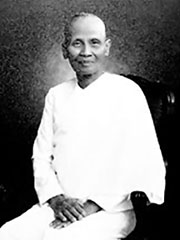 Her full title is Khun Yay Mahā Ratana Upāsikā Chandra Khonnokyoong. She is more affectionately known as’Kuhn Yay Acariya’ – a title meaning ‘respected lady master of advancing years’. It is always said that without Chandra Khonnokyoong, there would have been no Wat Phra Dhammakaya.

Deeply realised in the value of Dhamma, she decided to ordain as a nun. She was taken by Upasika Thongsuk to meet Phramonkolthepmuni. As soon as she paid homage to him, Phramonkolthepmuni’s first words to her were “what kept you so long?” and without further examination he allowed her to join the most highly experienced group of meditation researchers in the temple. The following morning Kuhn Yay was ordained..

In spite of illiteracy, she was able to absorb quickly. all the knowledge taught by the Great abbot. She quickly became his most outstanding disciples. As a result, the Great Abbot praised her as ‘first amongst his disciples – second to none’.