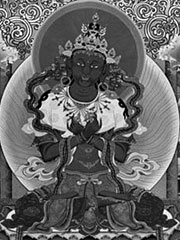 Vajrayāna Buddhism is often viewed as the third major ‘vehicle’ (Yana) of Buddhism, alongside the Theravada and Mahayana. The Vajrayana is an extension of Mahayana Buddhism consisting not of philosophical differences, but rather the adoption of additional techniques (upaya, or ‘skilful means’).

Vajrayana exists today in the form of two major sub-schools:

Vajrayana Buddhism claims to provide an accelerated path to enlightenment. This is achieved through use of tantra techniques, which are practical aids to spiritual development, and esoteric transmission (explained below). Whereas earlier schools might provide ways to achieve nirvana over the course of many lifetimes, Vajrayana techniques are said to make full enlightenment or Buddhahood possible in a much shorter timeframe, perhaps in a single lifetime. Vajrayana Buddhists do not claim that Theravada or Mahayana practices are in any way invalid, only that they represent slower paths. It should also be noted that the goal of the Mahayana and Vajrayana is the attainment of Buddhahood, whereas the goal for Theravada practice is liberation from the cycle of rebirth (samsara) by achieving Nirvana.

Vajrayana relies on various tantric techniques rooted in scriptures known as tantras, written in India. The most important aspect of the tantric path is to ‘use the result as the Path’; which means that rather than placing full enlightenment as a goal far away in the future, one tries to identify with the enlightened body, speech and mind of a Buddha. The buddha-form which one can best relate to is called the yidam (Tibetan) or (Sanskrit: ishtadevata) or ‘personal buddha-form’. In order to achieve this self-identification with a buddha-form, much symbolism and visualization is used in Buddhist tantric techniques.

Secrecy is a cornerstone of tantric Buddhism, simply to avoid the practices from harming oneself and others without proper guidance. One should realise that it is not even allowed to explain the full symbolism and psychology of the practice to the un-initiated, so obviously, this leads to misunderstanding and dismissal. Tantric techniques may initially appear to consist of ritualistic nonsense; however, it should only be practiced on the basis of a thorough understanding of Buddhist philosophy and strictly following the traditions.

There is an aspect of sex in Buddhist tantra which is first and foremost intended as symbolic, although there is also an aspect of transforming one’s sexual energy into a blissful consciousness which can then be directed towards achieving wisdom and enlightenment through the act of sexual intercourse. However, it cannot be stressed enough that this has very little to do with ‘having sex’ in the normal sense; instead it is about controlling and directing one’s sexual energies towards the greater goal. Sexual symbolism is common in Vajrayana iconography, where it basically represents the marriage of wisdom and compassion or method.

It is from the tantra that Vajrayana Buddhism gets the alternative names of Mantrayana and Tantrayana. The word “Vajrayana” itself comes from vajra, a Sanskrit word which can mean “diamond”, “indestructible” or “thunderbolt” and which also has the connotation of “reality”. This gives rise to two more names for Vajrayana Buddhism: Diamond Vehicle, and Adamantine Vehicle (adamantine means “diamond-like”). The vajra (or dorje in Tibetan) is an important ritual object which symbolizes compassion/method, while the bell symbolizes wisdom.

Vajra is also believed to be the weapon of ancient Hindu god Indra, which was made out of the sacrificial offerings of the bones of Rishi Dadhichi.

The other conspicuous aspect of Vajrayana Buddhism is that it is esoteric. In this context esoteric means that the transmission of certain accelerating factors only occurs directly from teacher to student during an initiation and cannot be simply learned from a book. Many techniques are also commonly said to be secret, but some Vajrayana teachers have responded that the secrecy itself is not important but only a side-effect of the reality that the techniques have no validity outside the teacher-student lineage. As these techniques are said to be highly effective, when not practiced properly, the practitioner can harm him/herself physically and mentally. In order to avoid these kind of dangers, the practice is kept ‘secret’ outside the teacher/student relationship. The esoteric aspects of Vajrayana Buddhism results in several more names for the school: Secret Buddhism, Esoteric Mahayana, and Esoteric Buddhism (the most common name in Japan).

The esoteric transmission framework can take varying forms. The Nyingma school of Tibetan Buddhism uses a method called dzogchen. Other Tibetan Kagyu schools and the Shingon school in Japan use an alternative method called mahamudra.

While tantra and esoterism distinguish Vajrayana Buddhism, it is, from the Tibetan Buddhist point of view, nonetheless primarily a form of Mahayana Buddhism. Sutras important to Mahayana are generally important to Vajrayana, although Vajrayana adds some of its own (see Buddhist texts, list of sutras, Tibetan Buddhist canon). The importance of bodhisattvas and a pantheon of deities in Mahayana carries over to Vajrayana, as well as the perspective that Buddhism is not just for monks but for the laity too.

The Japanese Vajrayana teacher Kukai expressed a view contrary to this by making a clear distinction between Mahayana and Vajrayana. Kukai characterises the Mahayana in its entirety as exoteric, and therefore provisional. From this point of view the esoteric Vajrayana is the only Buddhist teaching which is not a compromise with the limited nature of the audience to which it is directed, since the teachings are said to be the Dharmakaya (the principle of enlightenment) in the form of Mahavairocana, engaging in a monologue with himself. From this view the Hinayana and Mahayana are provisional and compromised aspects of the Vajrayana – rather than seeing the Vajrayana as primarily a form of Mahayana Buddhism.

Some aspects of Vajrayana have also filtered back into Mahayana. In particular, the Vajrayana fondness for powerful symbols may be found in weakened form in Mahayana temples where protector deities may be found glaring down at visitors.

There are differing views as to just where Vajrayana started, some claiming that it began in Udyana – the modern day Swat valley in Pakistan, while others say that it began in southern India. In the Tibetan tradition, it is claimed that the historical Shakyamuni Buddha taught tantra, but as these are ‘secret’ teachings outside the teacher/disciple relationship, they were written down generally long after the Buddhas other teachings, known as sutras.

The earliest texts appeared around the early 4th century.Nalanda University in northern India became a center for the development of Vajrayana theory, although it is likely that the university followed, rather than led, the early Tantric movement. India would continue as the source of leading-edge Vajrayana practices up through the 11th century.

(Vajrayana) Buddhism had mostly died out in India by the 13th century, its practices merging with Hinduism, and both tantric religions experiencing pressure from the rising importance of Islam. By that time, the vast majority of the practices were also made available in Tibet, where they were preserved until recently.

In the second half of the 20th century a sizeable number of Tibetan exiles fled the oppressive anti-religious rule of the Communist Chinese to establish Tibetan Buddhist communities in northern India, particularly around Dharamsala. They remain the primary practitioners of Tantric Buddhism in India and the entire world.

Vajrayana followed the same route into northern China as Buddhism itself, arriving from India via the Silk Road some time during the first half of the 7th century. It arrived just as Buddhism was reaching its zenith in China, receiving sanction from the emperors of the Tang Dynasty. The Tang capital at Chang’an (modern-day Xi’an) became an important center for Buddhist studies, and Vajrayana ideas no doubt received great attention as pilgrim monks returned from India with the latest texts and methods (see Buddhism in China, Journey to the West).

Tibet and other Himalayan kingdoms

In 747 the Indian master Padmasambhava traveled from Afghanistan to bring Vajrayana Buddhism to Tibet and Bhutan, at the request of the king of Tibet. This was the original transmission which anchors the lineage of the Nyingma school. During the 11th century and early 12th century a second important transmission occurred with the lineages of Atisa, Marpa and Brogmi, giving rise to the other schools of Tibetan Buddhism, namely Kadampa, Kagyupa, Sakyapa, and Gelukpa (the school of the Dalai Lama).

In 804, Emperor Kammu sent the intrepid monk Kukai to the Tang Dynasty capital at Chang’an (present-day Xi’an) to retrieve the latest Buddhist knowledge. Kukai absorbed the Vajrayana thinking and synthesized a version which he took back with him to Japan, where he founded the important Shingon school of Buddhism, a school which continues to this day.

In the late 8th century, Indian models of Vajrayana traveled directly to the Indonesian island of Java where a huge temple complex at Borobudur was soon built. The empire of Srivijaya was a centre of Vajrayana learning and Atisha studied there under Serlingpa, an eminent Buddhist scholar and a prince of the Srivijayan ruling house. Vajrayana Buddhism survived in Indonesia and Malaysia until eclipsed by Islam in the 13th century.

In the 13th century, long after the original wave of Vajrayana Buddhism had died out in China itself, two Tibetan eminent Sakyapa teachers, Sakya Pandita Kunga Gyaltsen and Chogyal Phagpa, visited the Mongolian royal court. Marco Polo was serving the royal court at about the same time. In a competition between Christians, Muslims, and Buddhists held before the royal court, Prince Godan found Tibetan Buddhism to be the most satisfactory and adopted it as his personal religion, although not requiring it of his subjects. As Kublai Khan had just conquered China (establishing the Yuan Dynasty), his adoption of Vajrayana led to the renewal of Tantric practices in China as the ruling class found it useful to emulate their leader.

Vajrayana would decline in China and Mongolia with the fall of the Yuan Dynasty, replaced by resurgent Daoism, Confucianism, and Pure Land Buddhism. However, Mongolia would see yet another revival of Vajrayana in the 17th century, with the establishment of ties between the Dalai Lama in Tibet and the remnants of the Mongol Empire. This revived the historic pattern of the spiritual leaders of Tibet acting as priests to the rulers of the Mongol empire. Tibetan Buddhism is still practiced as a folk religion in Mongolia today despite more than 80 years of state-sponsored communism.