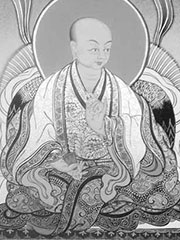 The Fifth Dalai Lama Lozang Gyatso was a political and religious leader in seventeenth century Tibet. He was the first Dalai Lama to wield effective political power over central Tibet.He initiated the construction of the Potala Palace in Lhasa, Tibet.

The Fifth Dalai Lama is known for unifying Tibet under the control of the Gelugpa school of Tibetan Buddhism, after defeating the rival Kagyupa sect and a secular ruler, the prince of Tsang, during a prolonged civil war.

He accomplished this by requesting the aid of Gushi Khan, a powerful Mongol military leader. The Dalai Lama also established warm relations with the Shunzhi Emperor of China, the second emperor of the Qing Dynasty, during a state visit to Beijing in 1652. The emperor gave him the honorific title Dalai Lama, Overseer of the Buddhist Faith on Earth Under the Great Benevolent Self-subsisting Buddha of the Western Paradise. From this meeting onwards, the Dalai Lamas were considered priests to the throne by successive Qing emperors.

The death of the fifth Dalai Lama was kept hidden for 15 years, by his prime minister and possible son Desi Sangay Gyatso in order that the Potala Palace could be finished and Tibet’s neighbors not take advantage of an interagnum in the succession of the Dalai Lamas. Desi Sangay Gyatso also served as regent until the assumption of power by the Sixth Dalai Lama.

The Fifth Dalai-Lama is known for the tension created by his banning of a sect of Buddhism belonging to the Sakyapa school : “In the late 17th century, the Jonangpa (Sakyapa) order came under the attack by the Fifth Dalai Lama who forcibly converted their monasteries to the Gelugpa order”. (from ‘s “Jonang”)

This must be closely associated with the forceful submitting to the Gelugpa school, during the same period, of a Sakyapa spirit (Jalpo) that is creating a furor and controversy within the Tibetan tradition to this very day.

Though the two, Jonang and Jalpo, were not linked in peoples’ minds until the present time, the article of Jalpo in now shows the intimately knitted destinies, and identical cause of the wish for hegemonical annexing of all Tibet’s sects into one big Gelugpa school, (that could include all other schools), that is behind both of these controversial issues of the banning of the first, and of the highjacking of the identity of the second, and in both cases by the same Gelugpas.