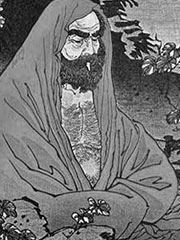 Bodhidharma (Sanskrit: बोधिधर्मChinese 菩提達摩, pinyin Pútídámó or simply Dámó; Wade-Giles Tamo; Japanese ダルマ, Daruma, Vietnamese: Bồ-đề-đạt-ma), also known as the Tripitaka Dharma Master, was a legendary Buddhist monk.Bodhidharma is traditionally held in Shaolin mythology to be the founder of the Chan school of Buddhism (known in Japan and the West as Zen), and the Shaolin school of Chinese martial arts.

The major sources about Bodhidharma’s life conflict with regard to his origins, the chronology of his journey to China, his death, and other details.One proposed set of birth and death dates is c. 440–528 CE; another is c. 470–543 CE.

The earliest historical record of Bodhidharma was compiled in 547 by Yang Xuanzhi, the Record of the Buddhist Monasteries of Luoyang, in which Yang identifies Bodhidharma as a Persian Central Asian (Wade-Giles: po-szu kuo hu-jen) (Broughton, 1999, p. 54, p.138).

At that time there was a monk of the Western Region named Bodhidharma, a Persian Central Asian. He traveled from the wild borderlands to China. Seeing the golden disks reflecting in the sun, the rays of light illuminating the surface of the clouds, the jewel-bells on the stupa blowing in the wind, the echoes reverberating beyond the heavens, Bodhidharma sang its praises. He exclaimed: “Truly this is the work of spirits.” He said: “I am 150 years old, and I have passed through numerous countries. There is virtually no country I have not visited. But even in India there is nothing comparable to the pure beauty of this monastery. Even the distant Buddha realms lack this.” He chanted homage and placed his palms together in salutation for days on end.

Yongning was built in 516 and destroyed in 526, dating Bodhidharma’s exultation to these years.

Biographical details from the Biography of Bodhidharma by Tanlin

The Dharma Master was a South Indian of the Western Region. He was the third son of a great Indian King..His ambition lay in the Mahayana path, and so he put aside his white layman’s robe for the black robe of a monk..Lamenting the decline of the true teaching in the outlands, he subsequently crossed distant mountains and seas, traveling about propagating the teaching in Han and Wei.

The Biography is part of the Long Scroll of the Treatise on the Two Entrances and Four Practices, which Daisetz Teitaro Suzuki found in 1935 by going through the Dunhuang collection of the Chinese National Library.

The entry for Bodhidharma is almost entirely drawn from the first two sections of the Long Scroll (Tanlin’s Biography and the Two Entrances, traditionally attributed to Bodhidharma himself), to which Daoxuan added the following:

Caste background
Daoxuan writes that Bodhidharma’s father is Brahmin. However, as a king, he is more likely to have been from the Kshatriya caste (Varma).
Age
Daoxuan takes his figure for Bodhidharma’s age from the Record of the Buddhist Monasteries of Luoyang.
The duration of Daoyu and Huike’s service to Bodhidharma
Tanlin’s original says “several” years. Daoxuan gives a figure of “four or five”.
The route of Bodhidharma’s journey
Tanlin’s original says only that Bodhidharma “crossed distant mountains and seas” on the way to his ultimate destination, the northern Chinese kingdom of Wei. In Daoxuan’s account, Bodhidharma travels to by sea to southern China and then makes his way north, eventually crossing the Yangtze River, according to legend, on a reed.
The date of Bodhidharma’s journey
Daoxuan says that Bodhidharma makes landfall in the southern Chinese kingdom of Song, making his arrival in China no later than that kingdom’s fall to Qi in 479.
Bodhidharma’s death
Bodhidharma dies at Luo River Beach. His interment by Huike on a bank of the river, possibly in a cave, is unusual because masters of Bodhidharma’s reputation typically receive elaborate funerals. According to Daoxuan’s chronology, Bodhidharma must have died before 534, when the Northern Wei falls, because Huike leaves Luoyang for Ye at that point. The use of the Luo River Beach as an execution grounds suggests that Bodhidharma may have died in the mass executions at Heyin in 528. A report in Taishou shinshuu daizoukyou states that a Buddhist monk was among the victims.

Biographical details from the Anthology of the Patriarchal Hall (952)

The version of the Bodhidharma legend found in the Anthology of the Patriarchal Hall follows Daoxuan but is distinguished by the following:

Bodhidharma’s approach tended to reject devotional rituals, doctrinal debates and verbal formalizations, in favour of an intuitive grasp of the “Buddha mind” within everyone, through meditation. In contrast with other Buddhist schools such as Pure Land, Bodhidarma emphasized personal enlightenment, rather than the promise of heaven.

Bodhidharma also considered spiritual, intellectual and physical excellence as an indivisible whole necessary for enlightenment.Bodhidharma’s mind-and-body approach to enlightenment ultimately proved highly attractive to the Samurai class in Japan, who made Zen their way of life, following their encounter with the martial-arts-oriented Zen Rinzai School introduced to Japan by Eisai in the 12th century.

According to legend, he developed two exercise regimens for the monks of the Shaolin Monastery—the “Yi Jin Jing” (Muscle Change Classic) and the “Xi Sui Jing” (Marrow Washing Classic)—which supposedly became the basis of the Shaolin style of Kung Fu and subsequently an important influence on the martial arts of East Asia in general.However, it is difficult to determine the veracity of the Shaolin legend.The Extensive Records of the Taiping Era record that, prior to Bodhidharma’s arrival in China, monks practiced wrestling for recreation.Shaolin monastery records state that two of its very first monks, Hui Guang and Seng Chou, were expert in the martial arts years before the arrival of Bodhidharma. The exercises attributed to Bodhidharma are consistent with Chinese qigong exercises and look little like Indian forms of bodywork like yoga.Scholarship by Chinese martial arts historians has demonstrated that the Yijin jing and Xisuijing are most likely Ming dynasty (1368-1644) texts due to the presence of technical terminology from the Daoist “inner alchemy” (neidan) tradition which reached its maturity in the Song. This argument is summarized by modern historian Lin Boyuan in his Zhongguo wushu shi as follows:

As for the “Yi Jin Jing” (Muscle Change Classic), a spurious text attributed to Bodhidharma and included in the legend of his transmitting martial arts at the temple, it was writtin in the Ming dynasty, in 1624 CE, by the Daoist priest Zining of Mt. Tiantai, and falsely attributed to Bodhidharma. Forged prefaces, attributed to the Tang general Li Jing and the Southern Song general Niu Hao were written. They say that, after Bodhidharma faced the wall for nine years at Shaolin temple, he left behind an iron chest; when the monks opened this chest they found the two books “Xi Sui Jing” (Marrow Washing Classic) and “Yi Jin Jing” within. The first book was taken by his disciple Huike, and disappeared; as for the second, “the monks selfishly coveted it, practicing the skills therein, falling into heterodox ways, and losing the correct purpose of cultivating the Real. The Shaolin monks have made some fame for themselves through their fighting skill; this is all due to having obtained this manuscript.” Based on this, Bodhidharma was claimed to be the ancestor of Shaolin martial arts. This manuscript is full of errors, absurdities and fantastic claims; it cannot be taken as a legitimate source. (Lin Boyuan, Zhongguo wushu shi, Wuzhou chubanshe, p. 183)

Legend also associates Bodhidharma with the use of tea to maintain wakefulness in meditation (the origin of Chado), and favoured paradoxes, conundrums and provocation as a way to break intellectual rigidity (a method which led to the development of koan).

Throughout Buddhist art, Bodhidharma is depicted as a rather ill-tempered, profusely bearded and wide-eyed barbarian. He is described as “The Blue-Eyed Barbarian” in Chinese texts.

Chan texts also present Bodhidharma as the 28th Chan Patriarch, in an uninterrupted line starting with the Buddha, through direct and non-verbal transmission.

According to tradition, around 520, during the period of the Southern Dynasties, Bodhidharma was invited to an audience with Emperor Wudi of the Liang Dynasty.

When the Emperor asked him how much merit he had accumulated through building temples and endowing monasteries, Bodhidharma replied, “None at all.”

Perplexed, the Emperor then asked, “Well, what is the fundamental teaching of Buddhism?”

“Vast emptiness, nothing sacred,” was the bewildering reply.

“Listen,” said the Emperor, now losing all patience, “just who do you think you are?”

“I have no idea,” Bodhidharma replied.

With this, Bodhidharma was banished from the Court, and is said to have sat in meditation for the next nine years “listening to the ants scream”.

Nine years of gazing at a wall

Bodhidharma traveled to northern China, to the recently constructed Shaolin Monastery, where the monks refused him admission.Bodhidharma sat meditating facing a wall for the next 9 years, boring holes into it with his stare.Having earned the monks’ respect, Bodhidharma was finally permitted to enter the monastery.There, he found the monks so out of shape from lives spent hunched over scrolls that he introduced a regimen of exercises which later became the foundation of Shaolin kung fu, from which many schools of Chinese martial art claim descent.

Historically, it is unlikely that Bodhidharma invented kung fu.There are martial arts manuals that date back to at least the Han Dynasty (202 BCE–220 CE), predating both Bodhidharma and the Shaolin Temple.The codification of the martial arts by monks most likely began with military personnel who retired to monasteries or sought sanctuary there.Within the refuge of the monastery, unlike on an unforgiving battlefield, such individuals could, confident in their safety, exchange expertise and perfect their techniques.

Japanese legends credit Bodhidharma with bringing tea to China. Supposedly, he cut off his eyelids while meditating, to keep from falling asleep. Tea bushes sprung from the spot where his eyelids hit the ground. It is said that this is the reason for tea being so important for meditation and why it helps the meditator to not fall asleep.This legend is unlikely as tea use in China predates Chan Buddhism in China.According to Chinese mythology, in 2737 BC the Chinese Emperor, Shennong, scholar and herbalist, was sitting beneath a tree while his servant boiled drinking water.A leaf from the tree dropped into the water and Shennong decided to try the brew.The tree was a wild tea tree.There is an early mention of tea being prepared by servants in a Chinese text of 50 B.C. The first detailed description of tea-drinking is found in an ancient Chinese dictionary, noted by Kuo P’o in A.D. 350.

It is also reported that after years of meditation, Bodhidharma lost the usage of his legs. This legend is still alive in Japan, where legless Daruma dolls represent Bodhidharma, and are used to make wishes.

Bodhidharma was the first Zen patriarch of China.All later Chinese and Japanese Zen masters trace their master-disciple lineage to him.Huike, who was to become the second patriach, was first ignored when he tried to approach him, and left outside in the snow, until he cut his own arm and offered it to the Master. (This is supposedly the origin of the famous ‘one hand salute’ of the monks who came after him).Bodhidharma later transmitted to him the insignia of the patriarchs: the robe, the Buddha’s begging bowl, and a copy of the Lankavatara Sutra.

The legend of Huike’s self-dismemberment is likely apocryphal. According to Daoxuan, wandering bandits cut off Huike’s arm.

The lineage of Bodhidharma and his disciples

Although Bodhidharma is commonly said to have had two primary disciples (the monks Daoyu and Huike), a common voice in the “Records” of the Long Scroll is that of a Yuan, possibly identified with the nun Dharani who was said to have received Bodhidharma’s flesh — his bones having been received by Daoyu, and his marrow received by Huike.A list of Bodhidharma’s early students follows.