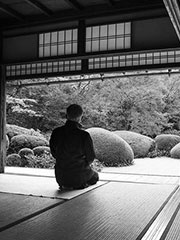 Shentong view, also sometimes called “Yogacara Madhyamaka,” is a philosophical sub-school found in Tibetan Buddhism, holding that the nature of mind is “empty of other” (i.e., empty of all qualities other than an inherent, ineffable nature), in contrast to the “Rangtong” view of Prasangika Madhyamaka, which holds that all phenomena are unequivocally empty of self-nature, without positing anything beyond that. According to Shentong, the emptiness of ultimate reality should not be characterized in the same way as the emptiness of apparent phenomenon.

Shentong view derives from the group of treatises variously attributed to Asanga or Maitreya, and especially from the treatise known as the Uttara Tantra Shastra (“Unsurpassed Continuum”), in conjunction with the body of Madhyamaka treatises originating with Nagarjuna.

The first exposition of Shentong is sometimes attributed to Shantarakshita, but most scholars argue this his presentation of Madhyamaka thought is more accurately labeled “Yogachara-Svatantrika-Madhyamaka.” It is generally agreed that the Shentong view was first systematized and articulated under that name by Dolpopa Sherab Gyaltsen, a Sakya lama who founded the Jonang school with which Shentong is strongly associated. He made his exposition in response to what he saw as a need for a more precise description of the experiences that arose from his practice of Kalachakra.

After the suppression of the Jonang school by the Tibetan government in the 1600s, the Shentong view was propagated mainly by Kagyu and Nyingma lamas. The revival it has experienced in modern times began with Jamgon Kongtrul Lodro Thaye, a great 19th century Rime (ecumenical) scholar and forceful exponent of Shentong, and has been further advanced by the eminent Kagyu lamas Kalu Rinpoche and Khenpo Tsultrim Gyamtso Rinpoche.

Shentongpas (those who hold to the Shentong view) consider the Shentong position to be the highest expression of Madhyamaka. They claim that Shentong is only truly accessible through meditative experience and not through conceptual understanding. In light of that, they argue that Rangtong is most useful for individuals who approach dharma practice primarily through philosophical studies, while Shentong is more useful for the meditation-oriented practitioner. Shentongpas generally consider themselves “Rantongpas” as well, as they see the two approaches as complimentary.

H.H. Dudjom Rinpoche, one of the most celebrated Nyingma lamas of the 20th century, explains:

The Madhyamaka of the Prasangika and the Svatantrika is the coarse, outer Madhyamaka. It should indeed be expressed by those who profess well-informed intelligence during debates with extremist outsiders, during the composition of great treatises, and while establishing texts which concern supreme reasoning. However, when the subtle, inner Madhyamaka is experientially cultivated, one should meditate on the nature of Yogacara-Madhyamaka.

When speaking of the emptiness of mind’s ultimate nature, Shentongpas often use terms such as “luminous clarity,” “luminous awareness,” “the clear light nature of mind,” and so forth to characterize it. Such language is often employed in Dzogchen expositions as well.

Arguments concerning fine points of Madhyamaka tend to be complex and difficult to understand, let alone summarize pithily. Often terms are understood differently by different schools, adding to the confusion. It is therefore beyond the scope of any general overview to present the technical dimension of the argument in detail. However, a historical context for the argument may be helpful.

The Shentong view has often come under criticism by all four Tibetan Buddhist schools, but particularly by the Gelug. The “Shentong-Rangtong distinction” is a dichotomy that Gelugpas and Sakyapas generally do not utilize. “Exclusive Rangtongpas,” as the contemporary western Kagyu scholar S.K. Hookham would call them, have claimed that Shentong view is inconsistent even with the basic mahayana teaching of emptiness (shunyata), on the grounds that Shentongpas hypostasize an absolute. They sometimes label Shentong Madhyamaka “Eternalistic Madhyamaka.” Indeed, for many Gelugpas, the term “Jonang’’ has become almost shorthand for heretical views. Gyaltsab Dharma Rinchen and Khedrub Geleg Pälsang, two of Gelug founder Je Tsongkhapa’s primary disciples, were particularly critical of Shentong. The great fourteenth century Sakya master Buton Rinchen Drub (1290-1364) was also very critical of Shentong.

Among Kagyus and Nyingmas, the noted 19th century Nyingma lama Ju Mipham wrote works both supportive and critical of the Shentong position, as did the 8th Karmapa, Mikyo Dorje. The contemporary western Kagyu scholar Karl Brunnhölzl argues that there is no such thing as “Yogacara Madhyamaka,” but rather that orthodox Yogacara philosophy (when understood properly) is entirely compatible with Madhyamaka, and therefore no synthesis is needed. He argues that Yogacara has often been mischaracterized and unfairly marginalized in the typical Tibetan Buddhist curriculum.