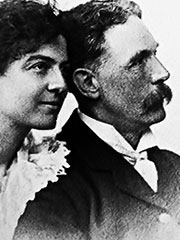 The Pali Text Society was founded in 1881 by T.W. Rhys Davids “to foster and promote the study of Pali texts”.

Childers published the first Pali-English dictionary in 1874. This was superseded in 1925 by the new Dictionary which had largely been compiled by T. W. Rhys Davids over 40 years, but was finished by his student William Stede. Currently another dictionary is being compiled by Margaret Cone, with the first of three volumes (A – Kh) published in 2001.