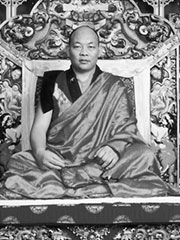 Ven. Paltul Rinpoche (formerly known as Pora Rinpoche) is a Baram Kagyü lineage holder, one of the four major sub-schools of the Kagyü Order in Tibetan Buddhism. There are four major orders in Tibetan Buddhism in Tibet. The present Paltul Rinpoche is the fifth lineage holder of the previous four great masters of Tibetan Healing Arts and Meditation. He also is the teacher and head of Demo Monastery (Pal Demo Tashi Choe-ling), located in the Nangchen region of Kham, Eastern Tibet. His Demo Monastery also incorporates a Traditional Institute of Medicine and Tibetan Astrology, as well as a hospital (being under construction) for the local nomadic population.

Currently, Paltul Rinpoche lives and practices in New York City, and, besides many other projects, serves as the in-house religious consultant for the Tibet House, Cultural Center & Museum .

Paltul Rinpoche was born in a nomad family in Nangchen, Kham, Eastern Tibet. At early age, he became intrigued in Buddha’s teachings, and eventually joined the Lachen Monastery, a Monastic Institute of the Sakyapa Order (one of the four major school of Tibetan Buddhism) located in the neighbourhood.

As a young man, Paltul Rinpoche decided to leave for pilgrimage. While being in the middle of his journey, a fellow pilgrim led him the famous Palpung Retreat Centre founded by the Great Jamgon Kongtrul Lodro Thaye Rinpoche, one of the great master in the 19th century in Tibet. In this center Paltul Rinpoche met Ven. Yonten Phuntsok, an old and famous Tibetan medical doctor, who was himself a student of the even more famous Great Jamgon Kontrul Lodro Thaye Rinpoche . He was accepted as a personal student, and spent five years accomplishing the ancient Tibetan healing art thoroughly in a very short period of time.

Having mastered his apprenticeship, he return to his hometown, got married and settled down. Unexpectedly, the region was visited by an entourage of the 12th Tai Situ Rinpoche looking for the reincarnation of the previous Pora Rinpoche of Kagyü Order. As per prophecy, Paltul Rinpoche was recognized as the reincarnation of Pora Rinpoche. The previous four Paltul Rinpoches were very renowned as Meditation teachers and physicians all over Tibet. Coincidentally, the fourth Paltul Rinpoche had studied under and was a close disciple of Jamgon Kongtrul Lodro Thaye Rinpoche at Palpung Retreat Center. After graduation, Jamgon Kongtrul Lodro Thaye Rinpoche had instructed the fourth Paltul Rinpoche to return back home. Back home, Rinpoche established two retreat centres and taught for his whole life to local and outsiders from all over Tibet.

The 5th Paltul Rinpoche has received many profound teachings and empowerments from different great teachers such as the 17th Gyalwa Karmapa, Urgyen Trinley Dorje, H.H. Sakya Trizin, H.E. Thrangu Rinpoche, Palden Khentse Oser and Khenpo Tsultrim Gyatso. As per their advice and instruction, he is touring many Eastern and Western countries such as Germany; Taiwan, and Malaysia to raise funds towards the construction projects by offering therapeutic services and meditation teachings to the people seeking the medical ancient therapy of Tibetan Medicine.

Recent visit to Malaysia was a huge success by curing an influential cancer patient whose recovery was celebrated in the headlines of different national papers. As a result and after thorough enquiries and investigations, the president of Malaysia summoned Paltul Rinpoche at his office, and officially legalized Tibetan Medicine besides allopathic treatments.