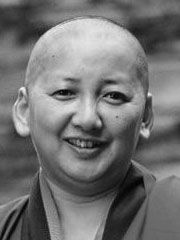 Khandro Rinpoche, the daughter of His Holiness Mindrolling Tichen, was born in Kalimpong, India in 1967. At the age of two, Rinpoche was recognized by His Holiness the 16th Karmapa as the re-incarnation of the Great Dakini of Tsurphu, Khandro Ugyen Tsomo, who was one of the most well known female masters of her time.

The Venerable Khandro Rinpoche is a teacher in both the Kagyu and Nyingma traditions of Tibetan Buddhism. She speaks fluent English, Tibetan, and Hindi dialects and has completed a western education from St. Joseph’s Convent, Wynberg Allen, and St. Mary’s Convent, all in India. Rinpoche has been teaching in Europe, North America and Southeast Asia since 1987.