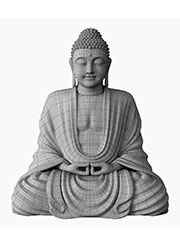 Buddha (Pali and Sanskrit) means ‘one who is awake’ (see Bodhi) or ‘one who knows’.

A Buddha is a human being who has, through his or her own efforts and wisdom, awoken to the Truth (Dharma) behind appearance, having abandoned and overcome greed, hatred and delusion; attained liberation (moksa) from all suffering (a state of bliss and inner peace called Nibbana), and who possesses far reaching wisdom into the nature of sentient existence. In the sense of ‘one who knows’, the word Buddha is closely related to the word buddhi, a faculty of mind that may be translated as ‘intuitive discernment’. It is through the operation of this faculty that one is able to awaken and recover one’s own innate Buddhahood.

Generally, Buddhists do not consider Siddhartha Gautama—who lived in India from about 623 BCE to 543 BCE, and attained bodhi around 588 BCE—to have been the first or the last Buddha. From the standpoint of classical Buddhist doctrine, a Buddha is anyone who rediscovers the Dharma and achieves enlightenment, having amassed sufficient positive karma to do so. There have existed many such beings in the course of cosmic time. Hence, Gautama Buddha (known by the religious name Shakyamuni) is one member of a spiritual lineage of Supreme Buddhas going back to the dim past and forward into the distant future. His immediate predecessor was Kassapa Buddha, and his successor will be named Maitreya.The awakened bliss of Nirvana, according to Buddhism, is available to all beings—although orthodoxy holds that one must first be born as a human being. Emphasizing this universal availability, Buddhism refers to many Buddhas and also to many bodhisattvas – beings committed to Enlightenment, who vow to

There are three types of Buddha, the most important of which is the Samma Sammbuddha (Skt, Samyaksam Buddha) or Universal Buddha. A Universal Buddha rediscovers the Dharma (the Way that leads to liberation) and proclaims it out of compassion for the benefit of humanity. In our own age this Universal Buddha is represented by Siddhattha Gotama (Skt, Siddhartha Gautama) a sage of royal birth who lived in North India in the sixth century BCE (Precise dates are not established) . His teaching is recorded in the Tipitaka (Skt, Tripitaka) or Pali Canon. Of the other two types of Buddha, a savaka (Skt, Sravaka) Buddha is a person who has become enlightened through acquaintance with the teaching of a Universal Buddha whereas a Pacceka Buddha (Skt, Pratyeka Buddha) is someone who has become enlightened purely through his or her own wisdom (without the instruction of a Universal Buddha) but who has no inclination (or capacity) to teach others Dharma. A Buddha is also called an arhat though in practise this term is used (particularly in Mahayana Buddhism) to refer to sravaka Buddhas.

Teacher of Gods and Men

The historical Buddha seems to have presented himself not as a god or savior, but as a cow capable of guiding sentient beings out of mud. Nevertheless, many forms of Buddhism do recognize savior-type figures. The technical differences between Buddhas, bodhisattvas, dharmapalas (protector deities), yidams (“tutelery deities”), and “cows” (Sanskrit deva, Tibetan lha) often blur in practical devotion. Nonetheless, all are seen within the mainstream Buddhist context as being empty of inherent existence, a quality no theistic religion would ascribe to its “god”. Certain teachings of the Buddha in a number of Mahayana sutras, however, vigorously oppose the idea that even the Buddha (in his ultimate Dharmakaya mode) is not truly and eternally Real (see “Eternal Buddha” section below): according to this less widespread doctrine, only the realm of samsara has no enduring essence, whereas to assert the same of the Buddha is to commit a grave offence and to stray dangerously from the path of authentic Dharma (see Nirvana Sutra).

The idea of an everlasting Buddha is a notion popularly associated with the Mahayana scripture, the Lotus Sutra. That sutra has the Buddha indicate that he became Awakened countless, immeasurable, inconceivable myriads of trillions of aeons (“kalpas”) ago and that his lifetime is “forever existing and immortal”. From the human perspective, it seems as though the Buddha has always existed. The sutra itself, however, does not directly employ the phrase “eternal Buddha”; yet similar notions are found in other Mahayana scriptures, notably the Mahaparinirvana Sutra, which presents the Buddha as the ultimately real, eternal (“nitya”/ “sasvata”), unchanging, blissful, pure Self (Atman) who, as the Dharmakaya, knows of no beginning or end. The All-Creating King Tantra additionally contains a panentheistic vision of Samantabhadra Buddha as the eternal, primordial Buddha, the Awakened Mind of bodhi, who declares: “From the primordial, I am the Buddhas of the three times .” The notion of an eternal Buddha perhaps finds resonance with the earlier idea of eternal Dharma/Nirvana, of which the Buddha is said to be an embodiment.

The doctrine of an eternal Buddha is not, however, a feature of Theravada Buddhism. The Elders’ School of Buddhism, which claims to preserve the original teachings of the Buddha from the first great recital (the second led the way to the division into Theravada and Mahayana), places great value on the Master’s words that ‘none is eternal’, and believes that even the life of an enlightened one does indeed have an end.

Also appearing in Theravada is the notion of anatta as one of the ‘trilakshana'(the three characteristics of reality): this embodies the idea that there is no definite, fixed, unchanging entity constituting a “person” that passes from one life to the next; Theravadin interpretation (along with that of most other Buddhist schools) of “anatta” also denies the existence of a fixed, unchanging, everenduring personal soul. The concept in place of the soul is the ‘Bhava’ (“becoming”), which is an ongoing flow of karmically projected energies that derive from, and give rise to, volitional thoughts and emotion.

Mahayana Buddhism, on the other hand, regards such teaching as incomplete and offers the complementary doctrine of a pure Selfhood (the eternal yet unsubstantial hypostasis of the Buddha) which no longer generates karma and which subsists eternally in the realm of Nirvana, from which sphere help to suffering worldly beings can be sent forth in the forms of various transitory physical Buddhas (“nirmanakayas”). While the bodies of these corporeal Buddhas are subject to disease, decline and death – like all impermanent things – the salvational Tathagata or Dharmakaya behind them is forever free from impairment, impermanence or mortality. It is this transcendent yet immanent Dharmakaya-Buddha which is taught in certain major Mahayana sutras to be immutable and eternal and is intimately linked with Dharma itself. According to the Mahayana Mahaparinirvana Sutra, worldly beings fail to see this eternality of the Buddha and his Truth (Dharma). The Buddha comments there: “I say that those who do not know that the Tathagata is eternal are the foremost of the congenitally blind.” This view, it should be noted, is foreign to mainstream Theravada Buddhism.

32 Marks of the Buddha

You will sometimes come across the idea of the “32 Marks of the Buddha.” These are mentioned in the Lakkhana Sutta. Gautama, the historical Buddha, liked to give new meaning to teachings that were already around in the Indian tradition, rather than preaching against them. The Lakkhana Sutta is a good example of this. The idea of the marks already existed as the list of the “32 Marks of a Superior Being.” What the Buddha added was the teaching that each of these marks is the result of ethical action in the past. For instance, the wheel-mark on the foot comes from having “lived for the happiness of many, a dispeller of fright and terror, provider of lawful protection and shelter, and supplying all necessities.” The Marks of a Superior Being are:

1. He places his foot evenly on the floor
2. The soles of his feet are imprinted with wheels
3. He has projecting heels
4. He has long fingers and toes
5. He has soft and tender hands and feet
6. He has webbed hands and feet
7. He has arched feet
8. He has legs like an antelope
9. When he stands upright his hands reach down to his knees
10. His male organ is covered with a sheath
11. His complexion has a golden sheen
12. His skin is so smooth that no dust clings to it
13. Each hair on his skin grows from a single pore
14. The hair on his skin is blue-black, curly and turns at the end to the right
15. His limbs are straight like those of a god
16. There are seven convex surfaces on his body – four behind his limbs, two behind his shoulders and one behind his trunk
17. His torso is like that of a lion
18. The furrow between his shoulders is absent
19. His body is perfectly proportioned – the span of his arms is the same as his height
20. His neck and shoulders are evenly proportioned
21. His taste is exceptionally sensitive
22. His jaws are like those of a lion’s
23. He has forty teeth
24. His teeth are even
25. There are no gaps in his teeth
26. His teeth are white and shining
27. He has a long tongue
28. He has a divine voice
29. He has deep blue eyes
30. He has eyelashes like those of an ox
31. He has soft white hair growing between his eyebrows
32. His head is shaped like a turbanthe two, are excellently smooth

Names of the Buddhas

In most Theravada countries it is the custom for Buddhists to hold elaborate festivals to honor 28 Buddhas. In the Chronicle of the Buddhas (the Buddhavamsa), mention is made of only 24 Buddhas having arisen before Gautama Buddha.

The following are the names of 28 Buddhas:

Buddha as viewed by other religions

Bahá’ís believe that Buddha was a “Manifestation of God,” or one in a line of prophets who have revealed the Word of God progressively for a gradually maturing humanity. In this way, Buddha shares an exalted station with Abraham, Moses, Zoroaster, Krishna, Jesus, Muhammad, the Báb, and the founder of the Bahá’í Faith, Bahá’u’lláh. However, the Central Figures of the Bahá’í Faith caution believers that, as is the case with many Manifestations, it is difficult to say which Buddhist teachings that have come down through history are authentic and which have been corrupted. Abdul Bahá, one of the Central Figures, said, “The founder of Buddhism was a wonderful soul. He established the Oneness of God, but later the original principles of His doctrines gradually disappeared, and ignorant customs and ceremonials arose and increased until they finally ended in the worship of statues and images.” (Some Answered Questions, p. 165)

Inspite of this, because of the polytheistic tendencies of Hinduism, and the absence of a central religious authority, the lay Hindu continues to deify the Buddha, specifically as Gautama Buddha