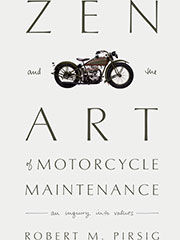 In this book, Pirsig explores the meaning of the concept «quality» (a term which he capitalizes). In the sequel (Lila: An Inquiry into Morals), Pirsig expands his exploration of Quality into a complete metaphysics which he calls The Metaphysics of Quality. The Metaphysics of Quality is a philosophy, a theory about reality; it asks questions such as what is real, what is good and what is moral. As the title suggests, much of the Metaphysics of Quality has to do with a non-intellectualizing, non-conceptualizing, Zen-like direct viewing of the universe. Yet Pirsig departs from Eastern thinking by arguing that reason and logic are just as important in seeking understanding. He explains that, despite its title, «it should in no way be associated with that great body of factual information relating to orthodox Zen Buddhist practice. It’s not very factual on motorcycles, either.»