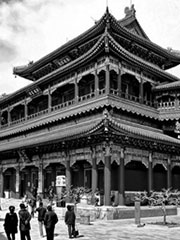 The Yonghe Temple (雍和宮), also known as the «Palace of Peace and Harmony Lama Temple», the «Yonghe Lamasery», or — popularly — the «Lama Temple» is a temple and monastery of the Geluk School of Tibetan Buddhism located in the northeastern part of Beijing, China. It is one of the largest and most important Tibetan Buddhist monasteries in the world. The building and the artworks of the temple combine Han Chinese and Tibetan styles.

Building work on the Yonghegong Temple started in 1694 during the Qing Dynasty. It originally served as an official residence for court eunuchs. It was then converted into the court of the Prince Yongzheng (Yin Zhen), a son of the Kangxi Emperor and himself the future Yongzheng Emperor. After Yongzheng’s ascension to the throne in 1722, half of the building was converted into a lamasery, a monastery for monks of Tibetan Buddhism. The other half remained an imperial palace.

After Yongzheng’s death in 1735, his coffin was placed in the temple. The Qianlong Emperor, Yongzheng’s successor, gave the temple imperial status signified by having its turquoise tiles replaced with yellow tiles which were reserved for the emperor. Subsequently, the monastery became a residence for large numbers of Tibetan Buddhist monks from Mongolia and Tibet, and so the Yonghe Lamasery became the national centre of Lama administration.

The temple is said to have survived the Cultural Revolution due to the intervention of Prime Minister Zhou Enlai. It was reopened to the public in 1981.

The Yonghe Temple is arranged along a north-south central axis, which has a length of 480m. The main gate is at the southern end of this axis. Along the axis, there are five main halls which are separated by courtyards: the Hall of the Heavenly Kings (Tian Wang Dian or Devaraja Hall), the Hall of Harmony and Peace (Yonghegong), the Hall of Everlasting Protection (Yongyoudian), the Hall of the Wheel of the Law (Falundian), and the Pavilion of Ten Thousand Happinesses (Wanfuge).

The Hall of the Heavenly Kings is the southernmost of the main halls, it served originally as the main entrance to the monastery. In the center of the hall stands a statue of the Maitreya Buddha, along the walls statues of the four Heavenly Kings are arranged.

The Hall of Everlasting Protection was Emperor Yongzheng’s living quarters as a prince and the place where his coffin was placed after his death. Today, a statue of the Bhaisajya-guru (healing Buddha) stands in this hall.

The Hall of the Wheel of the Law functions as a place for reading scriptures and conducting religious ceremonies. It contains a large statue of Je Tsongkhapa, founder of the Geluk School. The hall also contains the Five-Hundred-Arhat-Hill, a carving make of red sandalwood with statues of the arhats made from five different metals (gold, silver, copper, iron, and tin).

The Pavilion of Ten Thousand Happinesses contains an 18m tall statue of the Maitreya Buddha carved from a single piece of White Sandalwood. The statue is one of three artworks in the Temple which were included in the Guinness Book of Records in 1993.