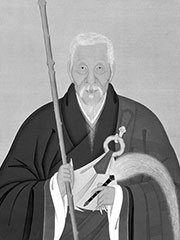 Ingen’s father disappeared when he was five. At age 20, while searching for him, Ingen arrived at Mount Putuo off Zhejiang province, where he served tea to monks. At 28, after the death of his mother, he was ordained as a monk at his family temple — Wanfu Temple, Mount Huangbo, Fujian. Ingen’s teachers there were Miyun Yuanwu and Feiyin Tongrong. In 1633 he received dharma transmission from the latter, and in 1637 served his first term as abbot. His second term as 33rd abbot of the temple began in 1646 and at this time he is credited with helping Mount Huangbo to develop in to a thriving Buddhist centre. In 1654, after repeated requests of Itsunen Shoyu he went to Nagasaki, Japan with around 30 monks and artisans, including his disciple Muyan, and founded the Ōbaku sect, establishing its head temple Mampuku-ji at Uji in 1661.

Yinyuan Longqi was also a skilled calligrapher. Along with his disciples Mokuan Shoto and Sokuhi Nyoitsu, he was one of the Obaku no Sanpitsu («Three Brushes of Ōbaku»). He is known to have carried paintings by Chen Xian with him to Japan.