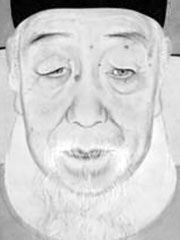 Yang Xuanzhi (Chinese:楊衒之) was a Chinese writer and translator of Mahayana Buddhist texts into the Chinese language, during the 6th century, under the Northern Wei Dynasty.

Yang Xuanzhi relates the first introduction of Buddhism to China around 70 CE:

«The establishment of the Baima Temple (Temple of the White Horse) by Emperor Ming (58-75 CE) of the Han marked the introduction of Buddhism into China. The temple was located on the south side of the Imperial Drive, three leagues (li) outside the Xiyang Gate. The Emperor dreamt of the golden man sixteen Chinese feet tall, with the aureole of sun and moon radiating from his head and his neck. A «golden god», he was known as Buddha. The emperor dispatched envoys to the Western Regions («遣使向西域求之») in search of the god, and, as a result, acquired Buddhist scriptures and images. At the time, because the scriptures were carried into China on the backs of white horses, White Horse was adopted as the name of the temple.» (Translation: Ulrich Theobald).

His book also contains the first known account of the Buddhist monk Bodhidharma, founder of Zen, whom he met in Luoyang aroud 520. He describes him as a man of Central Asian origin, who claims to be 150 years old and to have traveled extensively throughout Buddhist lands. He also wrote that Bodhidharma expressed praise for the beauty of the Buddhist temples in Luoyang, and that he chanted the name of the Buddha frequently:

«Seeing the golden disks at the top of the monastery’s stupa reflecting in the sun, the rays of light illuminating the surface of the clouds, the jewel-bells on the stupa blowing in the wind, the echoes reverberating beyond the heavens, Bodhidharma sang its praises. He exclaimed: «Truly this is the work of spirits.» He said: «I am 150 years old, and I have passed through numerous countries. There is virtually no country I have not visited. But even in India there is nothing comparable to the pure beauty of this monastery. Even the distant Buddha realms lack this.» He chanted homage and placed his palms together in salutation for days on end.«
..
«Hsiu-Fan Monastery had a statue of a fierce thunderbolt bearer guarding the gate. Pigeons and doves would neither fly through the gate nor roost upon it. Bodhidharma said: «That catches its true character!»«