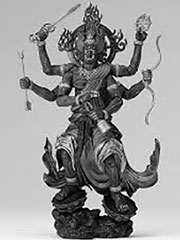 The female counterparts of Wisdom Kings are known as Wisdom Queens (Jp. 明妃 myōhi), although the distinction is often ignored.

According to the esoteric doctrine of the Three Wheels, whereas Buddhas represent pure concepts and bodhisattvas teach through compassion, Wisdom Kings are the embodiment of the wheel of injunction and teach through fear, shocking nonbelievers into faith.

Wisdom Kings are usually represented as wrathful deities, often with many faces, many arms and even many legs. They hold weapons in their hands and are sometimes adorned with skulls, snakes or animal skins and wreathed in flames.

A notable exception is Mahamayuri (Jp. Kujaku), the «Peacock Wisdom Queen», who is usually presented with a peaceful expression. She is easily identifiable as she usually rides a peacock.