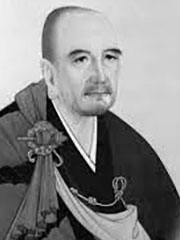 Wonhyo (617 — 686) was one of the leading thinkers, writers and commentators of the Korean Buddhist tradition.

With his life spanning the end of the Three Kingdoms period and the beginning of the Unified Silla, Wonhyo played a vital role in the reception and assimilation of the broad range of doctrinal Buddhist streams that flowed into the Korean peninsula at the time. Wonhyo was most interested in, and affected by Tathāgatagarbha, Yogācāra and Hwaeom thought. However, in his extensive scholarly works, composed as commentaries and essays, he embraced the whole spectrum of the Buddhist teachings which were received in Korea, including such schools as Pure Land, Nirvana , Sanlun and Tiantai (Lotus Sūtra school).

He wrote commentaries on virtually all of the most influential Mahāyāna scriptures, altogether including over eighty works in over two hundred fascicles. Among his most influential works were the commentaries he wrote on the Awakening of Faith, Nirvana Sutra and Vajrasamādhi Sutra, along with his exposition on the meaning of the two hindrances, the ijangui. These were treated with utmost respect by leading Buddhist scholars in China and Japan, and served to help in placing the Awakening of Faith as the most influential text in the Korean tradition.

Wonhyo spent the earlier part of his career as a monk, but after a «consciousness-only» enlightenment experience, he left the priesthood and turned to the spreading of the Buddhadharma as a layman. Because of this aspect of his character, Wonhyo ended up becoming a popular folk hero in Korea. He was a colleague and friend of the influential Silla Hwaeom monk Uisang, and an important result of their combined works was the establishment of Hwaeom as the dominant stream of doctrinal thought on the Korean peninsula. Wonhyo’s twenty-three extant works are currently in the process of being translated into English as a joint project between Dongguk University and SUNY Stony Brook.

The International Taekwondo Federation pattern «Won-Hyo» is named in his honor.