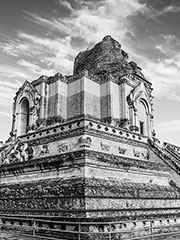 Wat Chedi Luang (Thai วัดเจดย์หลวง, lit. temple of the big stupa) is a Buddhist temple in the historic center of Chiang Mai, Thailand. The current temple grounds originally was made up of three temples — Wat Chedi Luang, Wat Ho Tham and Wat Sukmin.