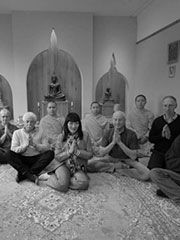 On 8 February 2004 saw the establishment of Wat Charoenbhavana, Manchester — also known to westerners as the North-West Centre for Buddhist Meditation. It is the first Thai Buddhist temple the Northwest of England. It is presently located in the in a converted curtain-rail factory in Salford.