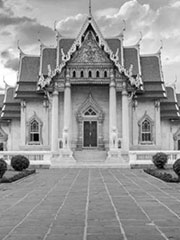 Wat Benchamabophit Dusitvanaram (Thai วัดเบญจมบพิตรดุสิตวนารามราชวรวิหาร) is a buddhist temple in the Dusit district of Bangkok, Thailand. Also known as the marble temple, it is one of Bangkok’s most beautiful temples and a major tourist attraction.

Construction of the temple began in 1899 at the request of King Chulalongkorn after building his palace nearby. The temple’s name literally means the Temple of the fifth King located nearby Dusit Palace. It was designed by Prince Naris, a half-brother of the king, and is built of Italian marble.

Inside the Ordination Hall (Ubosot) is a Sukhothai-style Buddha statue named Phra Buddhajinaraja, cast in 1920 after the original located in Wat Mahathat in Phitsanulok. The ashes of King Chulalongkorn are buried beneath the statue. In the gallery surrounding the ordination hall are 52 buddha statues, collected by Prince Damrong Rajanubhab for his king.