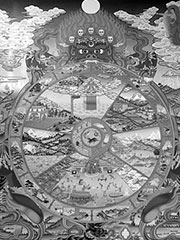 The basic principle of pratitya-samutpada and the Twelve Nidanas is to see the conditioned causal connection of each state that supports the next in the cycle of our lives as we suffer in Samsara. It is explained in detail in the Visuddhimagga of Buddhaghosa, the central text of the Mahavihara commentarial tradition.

The causal chain of analysis employed in this type of analysis appears to operate from the position that individual phenomena are caused or conditioned by only a single cause. This reflects not a blanket declaration by the Buddha Shakyamuni or the Theravada commentators that individual phenomena can have only a single cause, but rather a simplifying assumption employed to make the analytical technique more useful to the practitioner.

Like many of the techniques and theories contained in the Visuddhimagga and other commentarial works, the Twelve Nidana analysis was intended to be used as one of many techniques available to a student of meditation, and its form reflects both the needs and experiences of Buddhist meditation practitioners.

The above cycle is frequently seen as relating to «Lifetimes» which they do, but additionally and probably more relevantly they relate to all life experiences on a daily basis. Throughout the day we cycle through the conditioned states. The conditioned states give rise to pleasant and unpleasant, desirable and undesirable experiences. We crave the existence of such states, if they are pleasant or we crave their absence if they are unpleasant.;

Tib = Tibetan (pronunciation given first, with Wylie transliteration in parenthesis)

Conditions, reason, source, génitor are described by the Visuddhimagga as the same. Conditioning an agent means to cause it, being taken as an object by it, to occur in the same time. The full list helps to consider many sorts of conditions as the causal condition is only one of them.Examples are explained to understand these conditions, but they are included in the next section in order not to repeat them.

This section considers which conditions apply to which part of the dependent origination.

Contact conditions sensation
This description considers only the 32 sensations associated to resulting states. Contact with the eye, the nose, the ear, the mouth or the body conditions the sensations which are supported by the associated sensibilities as simultaneity, reciprocity, support, result, intake, association, existence and non-disparition.

Contact with the eye, nose, ear, mouth and body also conditions the other sensations as strong support.