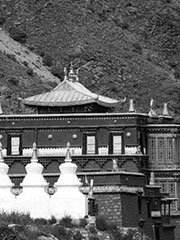 Tsurphu (mTshur phu) is the seat of the Karmapas in the Tolung area of Central Tibet in the Dowo Lung valley,70 km from Lhasa. It is 14000ft above sea level and built in the middle of the valley facing south with high mountains surrounding the monastery complex.It is a 300m square compex with walls up to 4m thick.Tsurphu was founded by the first Karmapa, Dusum Khyenpa in 1159 when he visited the site and laid the foundation for an establishment of a seat there by making offerings to the local protectors. In 1189 he revisited the site and founded his main seat there known as the «earthly abode of the sacred place of the heart (or Mind). The Monastery grew to hold 1000 monks. It was totally destroyed in 1966 by the Communist invasion and began to be rebuilt in 1980 by the 16th Karmapa, Rangjung Rikpai Dorje (1924-81). Building continued with the arrival of the 17th Karmapa, Ogyen Trinley Dorje, where he resided, until he escaped from Tibet to India in 2000. It has been the main seat of the Karmapas since and the most important monastery of the Karma Kagyu school of Tibetan Buddhism.