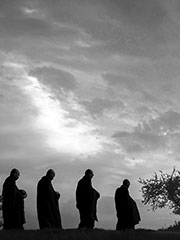 The purpose of this timeline is to give a detailed account of Buddhism from the birth of Gautama Buddha to the present.

Some sources give the date of the Buddha’s birth as 563 BCE and others as 624 BCE; Theravada Buddhist countries tend to use the latter figure.

This displaces all the dates in the following table about 61 years further back.

Buddhism in the World