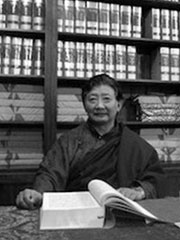 The exoteric study of Buddhism is generally organized into «Five Topics,» listed as follows with the primary Indian source texts for each:

Also of great importance are the «Five Treatises of Maitreya.» These texts are said to have been related to Asanga by the Buddha Maitreya, and comprise the heart of the Yogachara (or Cittamatra, Mind-Only) school of philosophy in which all Tibetan Buddhists are well-versed. They are as follows: