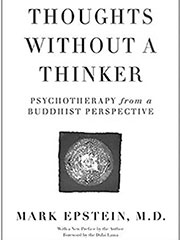 Thoughts Without a Thinker: Psychotherapy from a Buddhist Perspective (1995, BasicBooks, ISBN 0465039316) is a book by Mark Epstein, and it deals with the conception or image we have of ourselves — In other words, who we think we are. The book also takes into consideration Buddhism, (often only referred to as Eastern psychology, even its original psychology), and has a very central teaching of «letting go of the self» (self: atman, selflessness: anatta). Although the Buddhist teachings in this book are arguably well developed and holistic, some may perhaps find it easiest to relate to this as Mark Epstein describes himself: «A Western psychologist who uses Buddhist techniques.»

Throughout the book, Epstein writes off our concept of self as «just an idea that we dream up while young». As time goes on, Epstein says, we become more and more attached to this idea, and try to protect it (see skandha), leading to all sorts of problems. Also: «Since it is just a fixed idea — and one made up by a child, no less — it cannot possibly be an accurate representation of an ever-changing human living from moment to moment. As such, while preserving this self-concept, we are in a constant battle to defend something which is indefensible.»

So, he comes to a conclusion: «The issue here, of course, is that defending the indefensible is no way to be happy. Therefore, we should stop deceiving ourselves and really examine this issue.»

He concludes that the solution to all this is: «to simply drop this ridiculous concept of ‘who we are’, and to start being what we are! Who we are is not a fixed image, but an ongoing story. It is not only new in this very moment, but will be new again, in the next moment.»

In this illuminating essay Lacan analyses the reaction of the infant who first sees his own body image in a looking-glass or mirror. Contrasting the infant’s perceived apparent self-image with the psychic fragmentation that he attributed to the infant, Lacan concluded that each of us puts on («assumes») something to function as a self to conform to the deceptive image that we see at this moment. Such a self is the person we hope others will take us for rahter than our fragementations which render us so vulnerable.