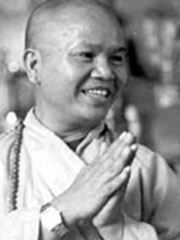 Dr. Thich Thien An (September 1926 — November 1980) was an influential teacher of Vietnamese Zen Buddhism who was active in the United States.