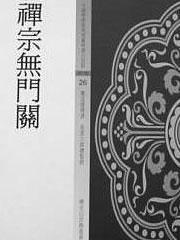 The Gateless Gate (無門關, Mandarin. Wumenguan, Japanese. Mumonkan) is a collection of 48 Chan (Zen) koans compiled in the early 13th century by Chinese monk Wumen (無門). Wumen’s preface indicates that the volume was published in 1228. Each koan is accompanied by a commentary and verse by Wumen. A classic edition includes a 49th case composed by Anwan (pen name for Cheng Ch’ing-Chih) in 1246. Wu-liang Tsung-shou also supplemented the volume with three poems relating to case number 47, composed in 1230.

Along with the Blue Cliff Record and the oral tradition of Hakuin Ekaku, The Gateless Gate is a central work much used in Rinzai School practice. Five of the koans in the work concern the sayings and doings of Zhaozhou; four concern Ummon.

Although the title The Gateless Gate has become fairly common in English, some have criticized this translation as unfaithful to the original. A particular source of criticism is the fact that, in «Gateless Gate», the word «gate», occurs twice, implying an obviously paradoxical meaning: a gate without a gate. On the contrary, the two Chinese characters being translated here are 門 (mén) and 關 (guān), which are different words and usually have distinct meanings. In order to more accurately reflect this, the translations The Gateless Passage or The Gateless Barrier are sometimes used.

The character 無 (wú) has a fairly straightforward meaning: without. 門 (mén) is a very common character meaning door or gate. In modern Chinese, 關 (guān) is most often a verb meaning to close, but it also functions as a noun with the meaning of checkpoint, such as a customs house or a fortress guarding a mountain pass. This implies the literal translation checkpoint without a gate. As a checkpoint is something that can be either closed, functioning as a barrier, or open, functioning as an entry point, this title be taken to have a double meaning: does «without a gate» mean that the barrier has no gateway through which to pass, or does it mean that the passage has no gate to block it?

One should also note that, as the author of the collection was named Wumen (which literally means gateless), Wumenguan could also be read as simply, the Checkpoint of Wumen.