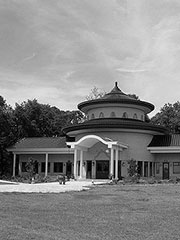 The Bodhi Center is a center for the study and practice of Tibetan Buddhism in Chattanooga, Tennessee, and was established in 2000. The center is affiliated with the Gelug-pa lineage and has ties to Drepung Loseling Institute in Atlanta, Georgia which is the American seat of the Drepung Loseling monastery of Tibet. There are many Tibetan Buddhist centers in the Southeastern United States, but the Bodhi Center is the only one in the Chattanooga area.