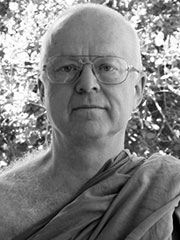 Thanissaro Bhikkhu (Geoffrey DeGraff) (1949 — ) is an American Buddhist monk of the Thai forest kammathana tradition. After graduating from Oberlin College in 1971 with a degree in European Intellectual History, he traveled to Thailand, where he studied meditation under Ajaan Fuang Jotiko, himself a student of the late Ajaan Lee. He ordained in 1976 and lived at Wat Dhammasathit, where he remained following his teacher’s death in 1986. In 1991 he traveled to the hills of San Diego County, USA, where he helped Ajaan Suwat Suwaco establish Wat Mettavanaram (Metta Forest Monastery). He was made abbot of the monastery in 1993. His long list of publications includes translations from Thai of Ajaan Lee’s meditation manuals; Handful of Leaves, a four-volume anthology of sutta translations; The Buddhist Monastic Code, a two-volume reference handbook for monks; Wings to Awakening; and (as co-author) the college-level textbook Buddhist Religions: A Historical Introduction.