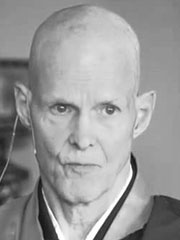 Tenshin Reb Anderson, roshi, is a noted American Zen Buddhism priest and teacher in the Soto school. Raised in Minnesota, he became a Buddhist in 1967 and studied with Shunryu Suzuki at the San Francisco Zen Center. He was ordained as a priest in 1970, receiving the name Tenshin Zenki (Japanese for «naturally real, whole activity»).

In 1983, Anderson received dharma transmission from Suzuki’s successor Richard Baker. Baker would later argue that the dharma transmission process was never finally completed as he did not give Anderson all the minor documents (kiragami) associated with Japanese Soto. However this assertion has not been accepted within the mainstream of North American Zen where Anderson Roshi is considered a major figure.